PrintNightmare Update: How To Mitigate The Vulnerability

RSVP to save your seat and ask questions:

IT and security teams wait for Microsoft to release a permanent fix for the vulnerability dubbed PrintNightmare, but organizations must stay protected in the meantime.

In this livestream, join Blumira’s Matthew Warner, CTO and Co-Founder, Mike Behrmann, Director of Security, Patrick Garrity, VP of Operations, as well as Marius Sandbu, Guild Lead, Public Cloud at TietoEVRY. They’ll discuss what they know about the vulnerability and mitigation steps to take. They’ll cover: Matt has over 10 years of experience in IT and development, focusing on business strategy, development, compliance, threat detection and penetration testing. Previously, he was Director of Security Services, Development & Security at NetWorks Group, responsible for defensive information security and services. Mike served at the National Security Agency for seven years where he focused on leading computer network exploitation operations and was later deployed to the FBI Detroit Division’s Cyber Task Force as a Threat Analyst. He joined NetWorks Group in 2015 where he and Matt Warner established the company’s Managed Detection and Response (MDR) SaaS offering and later became the MDR Team Lead. From 2017 to 2020, Mike worked as a Sr. Security Operations Engineer with Domino’s in Ann Arbor. He rejoined Matt, Nick, Amanda and the rest of the Blumira family in early 2020 as the company’s Director of Security. Mike has earned numerous Global Information Assurance (GIAC) certifications over his career and holds advanced degrees in both International Affairs and Information Assurance.

Patrick has years of experience in the security industry, building and scaling usable security products. He currently leads Blumira’s product, sales and marketing teams. Prior to joining Blumira, he led sales engineering, product marketing and international expansion for Duo Security. Marius is a Guild Lead of Public Cloud for TietoEVRY in Norway, where his main focus is end user computing and cloud native services. He is the author of books such as Mastering Citrix NetScaler and Getting started on Citrix NetScaler. Marius is a Microsoft MVP for Azure, Veeam Vanguard, vExpert EUC Champion, NVIDIA GRID Community Advisor, and Citrix CTP. He also blogs at msandbu.org. 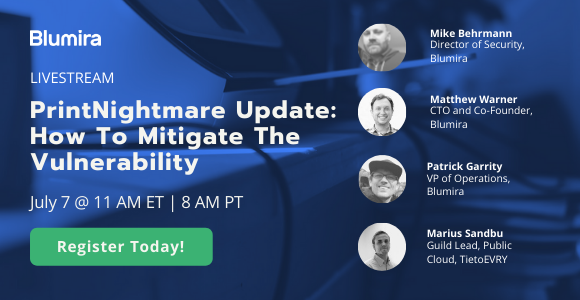