🚨 There’s reports emerging that a new zero day exists in Microsoft Exchange, and is being actively exploited in the wild 🚨

I can confirm significant numbers of Exchange servers have been backdoored – including a honeypot.

These vulnerabilities are nearly indistinguishable to many ProxyShell attacks in their log and behavior pattern once Exchange is exploited.

ProxyShell is a series of critical vulnerabilities discovered in 2021 that affect on-premises Microsoft Exchange servers. ProxyShell vulnerabilities are especially critical not only because they allow RCE, but because they are relatively easy to execute. The report of an RCE vulnerability within PowerShell Remote is additionally concerning; however, exposure should be limited to internal authenticated users as long as there are no exposed 5985 or 5986 ports to the internet.

It appears these new Exchange vulnerabilities were created by a specific new group that built new attack methods. However, the attack is no different from ProxyShell in the end as we’ve seen: a threat actor spawns cmd via ProxyShell (e.g., spawned via w3wp.exe) and then uses an environment’s living off the land binaries to execute the attack.

At the time of this writing, neither CVE rating can be found in NIST’s National Vulnerability Database or MITRE.

However, an RCE is one of the most dangerous types of flaws because it allows an adversary to execute malicious code on vulnerable servers. While Microsoft has confirmed that these are two new RCE vulnerabilities, they have further clarified that authenticated access to the vulnerable Exchange server is required to exploit either of them.

According to Microsoft, Exchange Online customers do not need to take any action. However, customers running Microsoft Exchange on-premises should apply Microsoft’s URL Rewrite Instructions and block any exposed Remote PowerShell ports.

The following mitigation details were provided by Microsoft and derived with support by the original reporter of this vulnerability.

Microsoft has confirmed that the following URL Rewrite Instructions, which are currently being discussed publicly, are successful in breaking current attack chains. 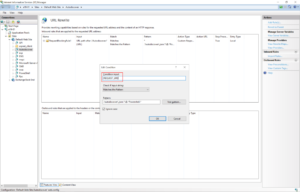 Impact: There is no known impact to Exchange functionality if the URL Rewrite module is installed as recommended.

Microsoft has prioritized getting a fix released for these vulnerabilities, so be prepared to start patching once that becomes available. Organizations should collect logs with Sysmon on Exchange hosts to identify any malicious activity.

Blumira customers can detect this attack at a number of positions within the kill-chain, keeping in mind that Exchange runs on top of the IIS process itself.

Blumira’s cloud SIEM detects and alerts you about suspicious behavior in your environment so that you can stop an incident early enough to prevent damage. Each finding we send is accompanied with a security playbook, giving you clear recommendations on how to remediate an attack. Our support team of security analysts is always available to answer questions on how to interpret a finding, or for other security help.

Blumira’s free SIEM is easy to deploy; IT and security teams can start seeing immediate security value for their organizations.