Burcham Hills chose Blumira over Sophos and Splunk for the quality of support, ease of sales process and affordability of its platform. They were up and running in less than two days with complete visibility into their cloud applications and Windows environment.

To be able to pay for a service and have pretty much a SOC team behind you to support you -- it definitely gives me a good night's sleep. Being able to centralize everything into one dashboard is a big benefit as well.

Initially, Burcham Hills was under a different management company that outsourced the majority of their IT services. The IT manager, Ronnie Baker, was hired in 2013 primarily to bring the community IT operations in-house, as well as develop their infrastructure and security while leveraging managed services as an additional layer of support.

One of the main goals starting as the IT Manager was to better position Burcham Hills with an overall technical vision that is directly aligned with their business strategies. That includes introducing automation, virtualization and leveraging cloud resources in their IT infrastructure to modernize their environment and improve security operations efficiency and efficacy.

After an annual security audit, he presented the risks and threats from the auditor to his leadership team to justify a budget for a security monitoring solution. He forecasted what needed to happen in the next one to two years for their security roadmap.

He leveraged NIST 800-53 as a framework to develop their security plan, and having a SIEM tool would also help them meet compliance requirements like HIPAA and PCI-DSS.

“When I talked to Blumira, we had two people on the call, and they were able to answer all of the questions I had,” Baker said. “They followed up with a great proposal to me in a timely manner.”

He evaluated several other vendors, but chose Blumira for the ease and rapidness of the sales process, the quality of the security support and the affordability of its platform.

“Other solutions I was looking at — like Sophos and Splunk — seemed more enterprise and I felt that we would get lost trying to deploy and support them,” Baker said. “I have no doubt Blumira will continue to grow and I’m glad to be part of that story.”

When it came to deployment and implementation, Burcham Hills was able to quickly set up the needed Blumira integrations and start pulling logs from Microsoft 365, Azure and other tools. They now have insight into all of their Windows servers, workstations, firewalls, and Sophos endpoint security.

“Within less than two days, we were up and running,” Baker said. “Anything that could be vulnerable or exposed — I’ve got to find a way to get it integrated [with Blumira] so we can keep eyes on it and know what’s going on at all times.”

Burcham Hills was able to realize the value of an automated detection and response platform, delivered by Blumira’s cloud security platform.

“My goal was to bring automation into the community,” Baker said. “Now when a security event happens, I’m alerted right away by phone.” 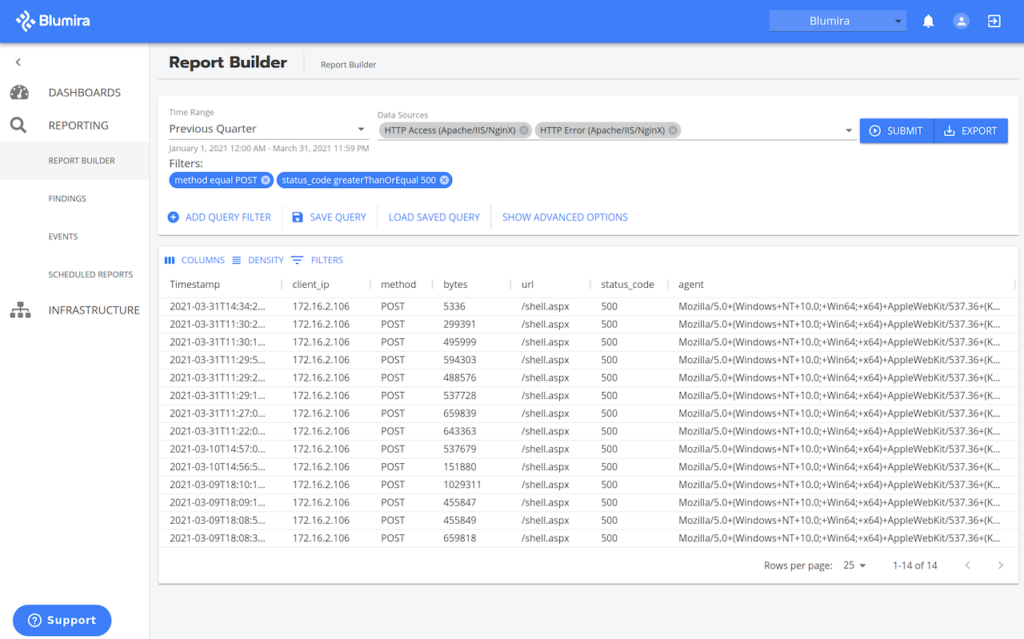 He uses the reports to inform whether he needs to take action or meet with his IT specialist to determine the need for further investigation.

An Extension of Their Security Team

With a small IT team managing help desk requests, computing systems, ticket requests and server applications for the entire community, Burcham Hills needed a solution that worked as an extension of their security team.

“To be able to pay for a service and have pretty much a SOC team behind you to support you — it definitely gives me a good night’s sleep,” Baker said. “Being able to centralize everything into one dashboard is a big benefit as well.”

When Baker reached out to their endpoint security company, they didn’t receive the level of support they were expecting. With Blumira, he was able to work through subsequent security incidents they were alerted to with the help of Blumira’s responsive and hands-on technical account managers and security analyst team.

“As soon as I brought the security event to Dave’s attention, he was all over it,” Baker said. “The amount of support we receive is amazing.”

With Blumira’s automated threat detection and response, you don’t have to be a security expert to be secure.