What is a Honeypot?

Honeypots are an effective security measure that can be used to detect lateral movement and potential bad actors on your network. Blumira makes it easy to deploy and manage honeypots with low effort, allowing for early detection of attacks and threats.

See what you can detect with Blumira’s honeypots.

So you’re probably asking yourself – what’s a honeypot?

Well first off, there’s many security controls within an organization’s environment.

In this instance, this one has a firewall. Every organization with internet connectivity is likely going to have a firewall in place, which can eliminate a lot of potential threats.

But the reality is, hackers still find ways to get into an organization’s environment. And although network segmentation can be put into place as well, that doesn’t mean it’s preventing security threats from getting access to systems.

So what a honeypot is designed to do is replicate a login page similar to other systems, such as finance, IT, business applications and productivity.

Now, when an attacker logs in – from a hacker on the internet who gains access to a corporate environment – or perhaps someone internally who is trying to access one of these systems – the honeypot will detect that activity and immediately send an alert to IT or an IT security team.

This now provides visibility to that team, who can determine if someone is doing something malicious within the organization’s environment.

And that’s the value of a honeypot, which is included as part of Blumira’s service – a simple and useful way of strengthening your network.

Honeypots are one of the most powerful internal detection mechanisms a network can have even if they only detect something once in a blue moon. See how easy it is to set up your own honeypot with Blumira’s sensor, and start detecting and responding to threats today.

Detecting RDP Attacks With Honeypots
See our honeypot data on remote access attack trends against RDP since the start of the pandemic and rise in remote work, and get advice on how to protect your organization against remote attacks. 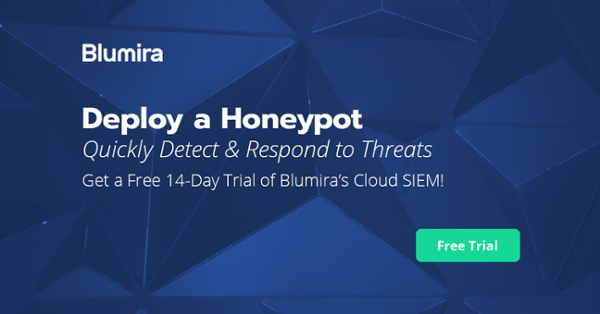