How to Reduce Your Overall Attack Surface With Geoblocking

One of the most basic and best security practices includes limiting which geographic regions you allow to connect to your environment – also referred to as geoblocking. It’s extremely effective to track or control inbound connections using firewall policies, IDS/IPS (Intrusion Detection and Protection Systems), and authentication attempts from certain countries you don’t typically do business in.

How can you start tracking those? Next-generation firewalls (NGFW), IPS and other network security technologies generate a lot of metadata for each logged connection to your systems. This additional metadata can allow you to create more granular firewall rules to detect potential threats.

To defend your network, adopting a Positive Security model can help by denying most connections and only allowing the things which are required on your network, also known as a allowlist model. This requires defining the characteristics of all known good traffic connections, applications or endpoints on your network.

According to Blumira’s Director of Security, Mike Behrmann, it’s common for NGFWs and IPSes to geographically pinpoint an Internal Protocol (IP) address in one or more logfields (such as City: Beijing; Country Code: CN) via DNS registrant information.

A U.S. company with a customer base primarily located in one specific region, like the Midwest, may not want to allow inbound connections from countries with either lax cybersecurity laws or those that are known for state-sponsored advanced persistent threats (APTs) in order to shrink their risk profile.

By leveraging firewall and IPS logs, Blumira is able to enrich our pre-built threat detection conditions with contextual data to better inform our security findings. Our security team creates customized threat detection rules for specific clients based on the industry. We can also create rules based on their request to help monitor and protect their publicly exposed assets.

Some of the relevant detections that come built into Blumira’s platform include: 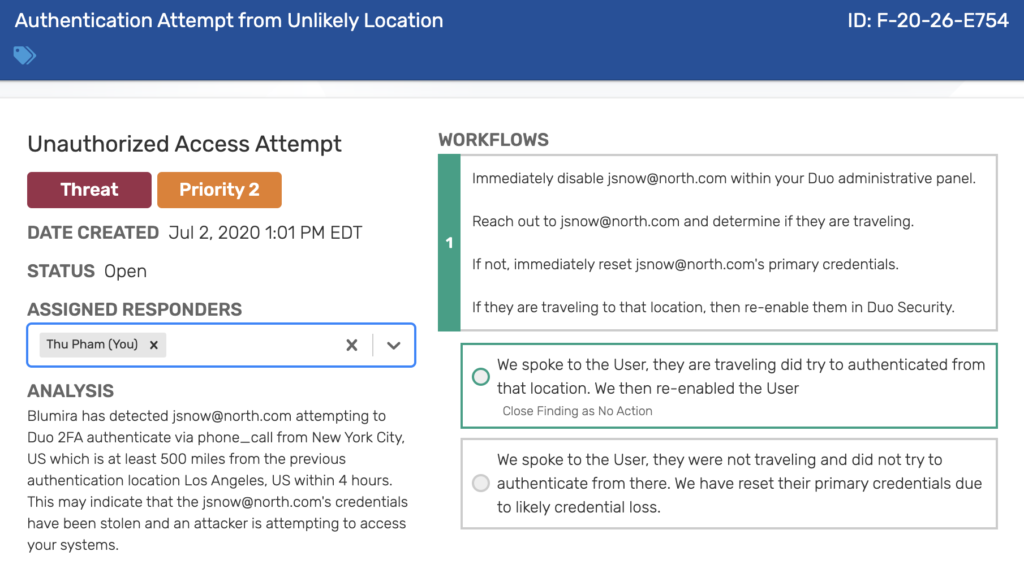 Fortigate SSL VPN Anomalous Access Attempt – This finding can identify password spraying attacks, the act of trying a few authentications against many users. Attackers use this method to avoid most brute-force detections or triggering lockouts, which can call attention to their actions. In this case, an attack has been identified against the Fortigate SSL VPN login. An attacker is likely attempting to gain access through credential reuse or other credential attacks.

RDP Connection from Public IP – By detecting any public IPs connecting to your network via RDP, Blumira can alert you to potentially malicious attempts to gain access and install malware. Ransomware actors routinely use publicly accessible RDP services to gain an initial foothold in victim networks. RDP connections should be made via VPNs and never left open to the internet.

External to Internal Scanning – By detecting scanning, you can protect against both internal and external attackers that may be performing reconnaissance on your network, searching for vulnerable areas to attack and move laterally throughout your environment. Blumira can detect any internal port scanning tools (indicators of early attack stage), multiple internal reconnaissance connections over a short period of time (target enumeration), as well as any honeypots being actively scanned.

Another way to reduce your overall attack surface is by monitoring the time and location of access attempts to detect potentially anomalous user activity. If a user is connecting from Los Angeles four hours after originally connecting from New York City, it’s possible that their account may have been compromised through stolen credentials or other identity attack. In the above finding, we detected an authentication attempt from an unlikely location – which could indicate that the user’s credentials had been stolen or compromised, and an attacker is attempting to access your systems.

To help you with the next steps of incident response, we provide a workflow with recommendations on mitigation, including immediately disabling the user within your Duo Security two-factor authentication administrative panel. Then, confirm with the user their travel plans, or reset their credentials.

While this level of threat response is automated to help you quickly contain threats in near real-time, Blumira’s security team can also provide additional assistance or answer your questions as needed.